What encoding does my Konsole support?

How can I check what encoding (ASCII, UTF-8, UTF-16 etc) my Terminal uses?

It shouldn't matter, but I am using Konsole on KDE3.5.

From a Unicode and UTF-8 FAQ for UNIX/Linux: You can get a list of all locales installed on your system (usually in /usr/lib/locale/) with the command locale -a. Set the environment variable LANG to the name of your preferred locale.

Konsole supports whatever your system supports - the important thing is that you export LANG in your shell so that the programs you run display their characters using the correct locale.

Konsole supports the encodings which Qt knows how to convert to/from Unicode. It uses the QTextCodec class (see documentation which lists the supported encodings) which includes many but not necessarily all possible encodings which you may have installed on your system.

When you run Konsole, you can select (in the Advanced tab) an encoding from those which are tabulated in its runtime tables. 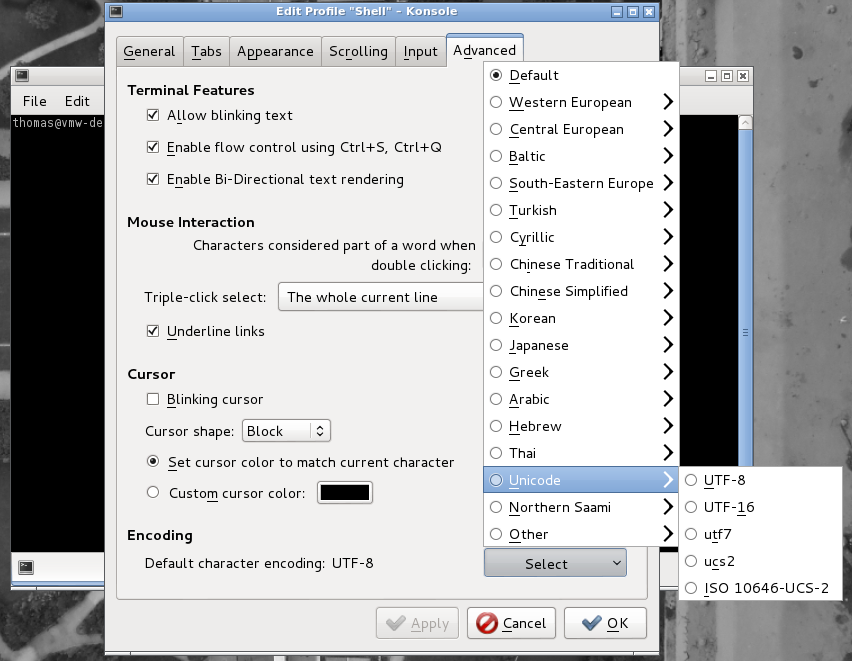 If you need an encoding which Konsole does not support, some people suggest that luit can be useful, e.g., in IBMgraphics.

Not the answer you're looking for? Browse other questions tagged kde terminal character-encoding or ask your own question.