I am having a hard time installing Marlin on Debian. PPA command doesn't seem to be working in Debian. Is there any other way I can get rid of Nautilus and install another alternative? Or better yet get Nautilus to not eat up CPU like cereals for breakfast.

Nemo is a nice alternative - it this file manager for Cinnamon, and is based on Nautilus - see here.

The problem is, in the latest versions, the cinnamon screensaver installed with it means that the screen is locked twice...

So eventually I gave up on Nemo, and just set Ctrl+Alt+N in keyboard shortcuts to run the command killall nautilus

You can also run tracker-control -k which will stop the tracker thing, sometimes causes Nautilus to crash (in the Gnome desktop atleast). (I set this as well as Ctrl+Alt+Shift+T in keyboard shortcuts).

Also, in when starting Gnome, Nautilus is started in the background, and can often shoot to 100%CPU - you can stop this by running gnome-session-properties and un-ticking it.

To remove nautilus on Debian, running sudo apt-get remove nautilus should work. BEWARE, it will may try and remove other things you want, e.g. Gnome Tweak Tool, some Media players, etc.

For installing marlin, it is not in the usual repositories, so this may help:

Check out Thunar, it's really lightweight and should provide a nice experience while browsing. 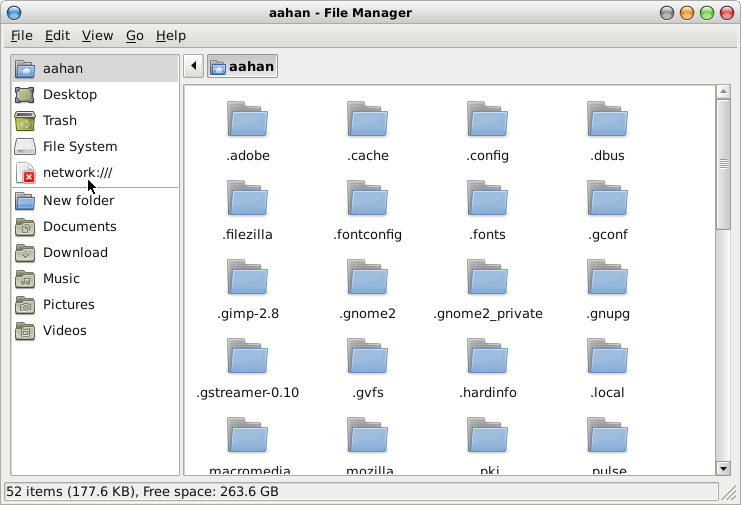 It is also possible to enable buttons, and is usable from an under-clocked Raspberry Pi to a super-computer - wilf

There's a great alternative for nautilus -- SpaceFM. Check out the screen below: 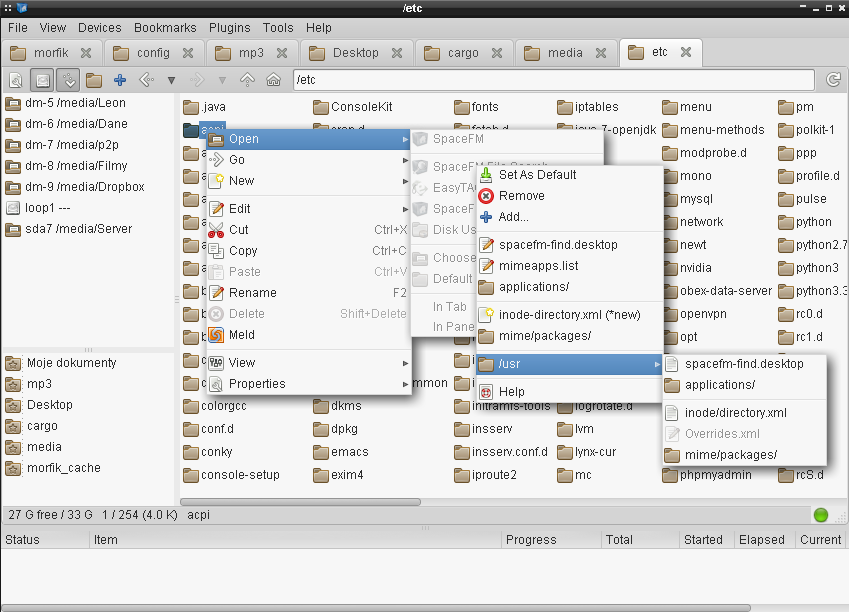 SpaceFM is a multi-panel tabbed file and desktop manager for Linux with built-in VFS, udev- or HAL-based device manager, customizable menu system, and bash integration. SpaceFM is popular among novice and power users alike for its stability, speed, convenience and flexibility.

SpaceFM is a pretty powerful tool. You can install it with aptitude.

I would suggest a look on this nice Comparison of File Managers (wikipedia) about what's available. Next thing I suggest looking up which File Browsers Lightweighted GNU/Linux Distributons use. Another great resource to look up the latter is Distro Watch, where I would look what lightweighted Distros use and give a look at their file managers.

As always, finding a well-balanced blend of hardware resources (what is possible) and functionality with an understandable dash of desire for convenience. Personally, I am highly satisfied with Thunar, as - for me (!!!) - it provides exactly what I want and need on a G. At the same time I know a lot of people what are not happy with it.

Also a personal note: Not that your question is misplaced, but this has high potential for some serious discussion bordering a flame war... ;)

Pcmanfm looks like Nautilus, so you may find it to be a great alternative.

I personally use dolphin, and recommend it if you want a more featureful FM. Of course, your mileage may vary.

Not the answer you're looking for? Browse other questions tagged debian nautilus or ask your own question.

3
PPC Debian: eth0: switching to forced 10bt / 100bt
10
Migrating from Ubuntu to Debian
2
How to get rid of the *Personal File Sharing* bar in Nautilus?
2
Debian 7.3 (stable) with GNOME 3.4.2, new Nautilus accel won't stick
1
How to configure Request Tracker on Debian and generate tickets?
5
Nautilus in Gnome 3: delete key is not working
0
Install mysql-server 5.6 on Debian Wheezy
3
How works the "eject usb driver" from Gnome?