Why doesn't my screen lock in XFCE?

I'm trying out XFCE on Arch Linux, and for some reason the Lock Screen option in the session menu doesn't do anything. Neither does running xflock4 at the command line (it exits 0 with no output).

Do I need to install a screensaver package or something?

Do I need to install a screensaver package or something?

Yes, according to the wiki, you need to choose and install a locker. xflock4 will then activate it.

or if you don't have the variable yet:

Looks like xflock4 does support external config now. What I did is:

Now that command is used for locking. I guess gnome-screen-saver broke on upgrade.

This is for XFCE. If you don't have that property already, you add it by:

VERY IMPORTANT: you need a screensaver running to securely lock your screen. light-locker is one choice. At the end make sure switching consoles with ctrl+alt+F1 or some other F# does not let you circumvent the lock screen. See:

Case_of's answer was close for me, but dm-tool was already listed in my /usr/local/bin/xflock4. But it tried xscreensaver-command and gnome-screensaver-command first. I moved those to the second for loop, and moved dm-tool up as the only option at first (removing the first for loop):

I also mapped it to Win+L, to be like Windows.

I just (January 2018) tried to get screen locking working under XFCE. I'm a little surprised it didn't work by default. I initially tried to install light-locker and xscreensaver but neither worked.

What worked for me was to install the xlockmore package which provided /usr/bin/xlock which seems to work great. With that command now installed, I was able to configure the xfce session to use it:

or if you don't have the variable yet:

My /usr/bin/xflock4 script already pays attention to that LockCommand setting so there was no need to edit the script once I had the setting applied.

Xlock has a ton of different modes and settings which, by default, it randomizes through. I settled on:

To test them use:

you can check the documentation for more information

worked after enabled on the Screensaver preferences (GUI of Xscreensaver) the option "Lock screen after", and edit keyboard lock shortcut to the command above 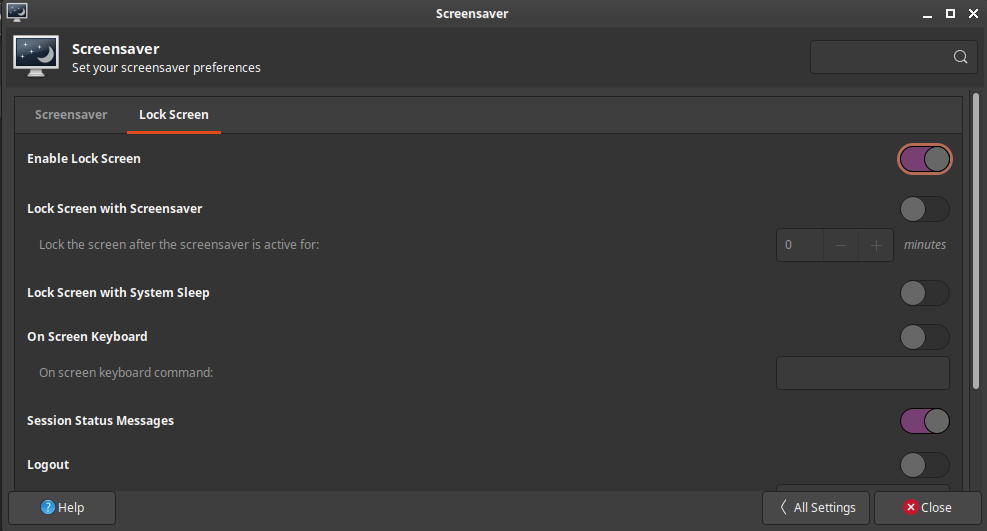 Not the answer you're looking for? Browse other questions tagged arch-linux xfce screen-lock or ask your own question.

10
Xfce and Xscreensaver doesn't seem to consider keyboard activity "activity" - how change?
57
How can I lock my screen in Gnome 3 without GDM?
8
Light Locker - Run script on screen lock/unlock
3
Line across the entire screen that occurs only when running Xfce with a Dock application
4
how to customize gnome-screensaver on xfce desktop
0
Line through screen after install of Debian 9