How Wine is not an emulator?

As I understand emulators (in a simple way), they do translate or substitute the function calls of a program using functions of system X into functions used by system Y in which the program is being run onto. Wine project claims that Wine Is Not an Emulator, because:

Instead of simulating internal Windows logic like a virtual machine or emulator, Wine translates Windows API calls into POSIX calls on-the-fly, eliminating the performance and memory penalties of other methods and allowing you to cleanly integrate Windows applications into your desktop.

No, or at least not in the sense that WINE does -- by literally translating system calls one to one in user space. An emulator does this abstractly via a more circuitous route; it does not translate system calls directly.

A true emulator creates a virtual machine (e.g. x86-64), not a virtual operating system. You can then in theory run any operating system targeting that style of machine. Commonly an "emulator" includes the operating system, but that's not really what it is emulating; the OS it includes is the same as one that would run on a real machine.

Emulators are sometimes used to simulate hardware different from the host machine, but also hardware that is exactly the same for the purpose of running one OS inside another.

WINE is different from this in that it is not actually windows. You could run an x86-64 emulator with a real copy of windows inside it, but that is not what WINE is. Their claim that it is actually more efficient than an emulator makes sense -- the overhead for just translating system calls is probably lower than that of running a VM. The disadvantage is that WINE can only be windows; you cannot use it with some other OS as you could a normal VM.

Wine is a shim which intercepts windows API calls and converts them in the fly to the corresponding Linux API call(s). A emulator or virtual machine instead emulates a physical machine. Obviously a shim is more efficient, but may not be completely capable of mimicking the desired functionality.

WINE is an emulator. The way an emulator does what it does is utterly irrelevant to the fact that it is, by definition, a mechanism for running the software of one OS in another. At what layer of that BIOS to app route it happens is immaterial. What is germane is that the OS that is being emulated is not being run, which is the case with WINE. WINW would have been a more precise acronym, as in WINE is not Windows.

This means that sometimes there are run-time contexts which will allow Wine + Linux to run a Windows application faster than Windows itself! An Emulator could never have that possibility because its code would be busy simulating the CPU/WinOS platform on top of the Unix-based platform at a higher level of abstraction. In this case, more translations and interfaces are necessary to run a Windows application. (See diagram below) 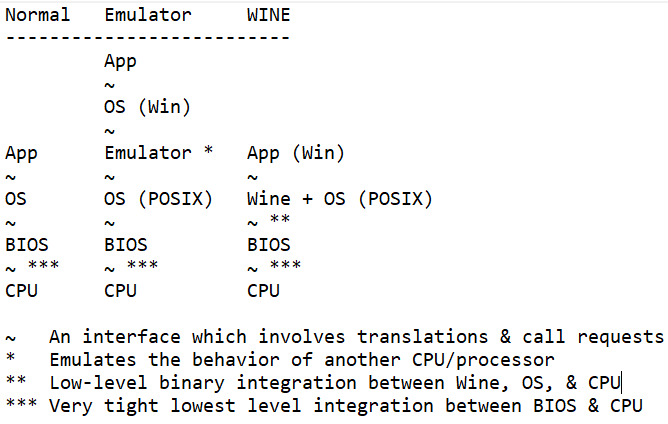 Not the answer you're looking for? Browse other questions tagged wine emulation or ask your own question.

6
alternatives to wine
1
wine in Xmonad is not tiling
4
Wine: do not check for Mono installation
0
Warframe not starting [wine]
1
How do I fix the error that's causing Video Repair Tool not to run in Wine?
0
Wine: do not check for Gecko installation
3
How to add a windows program (under Wine) that does not have an installer?
2
How can I remove wine software that even wine can't remove?